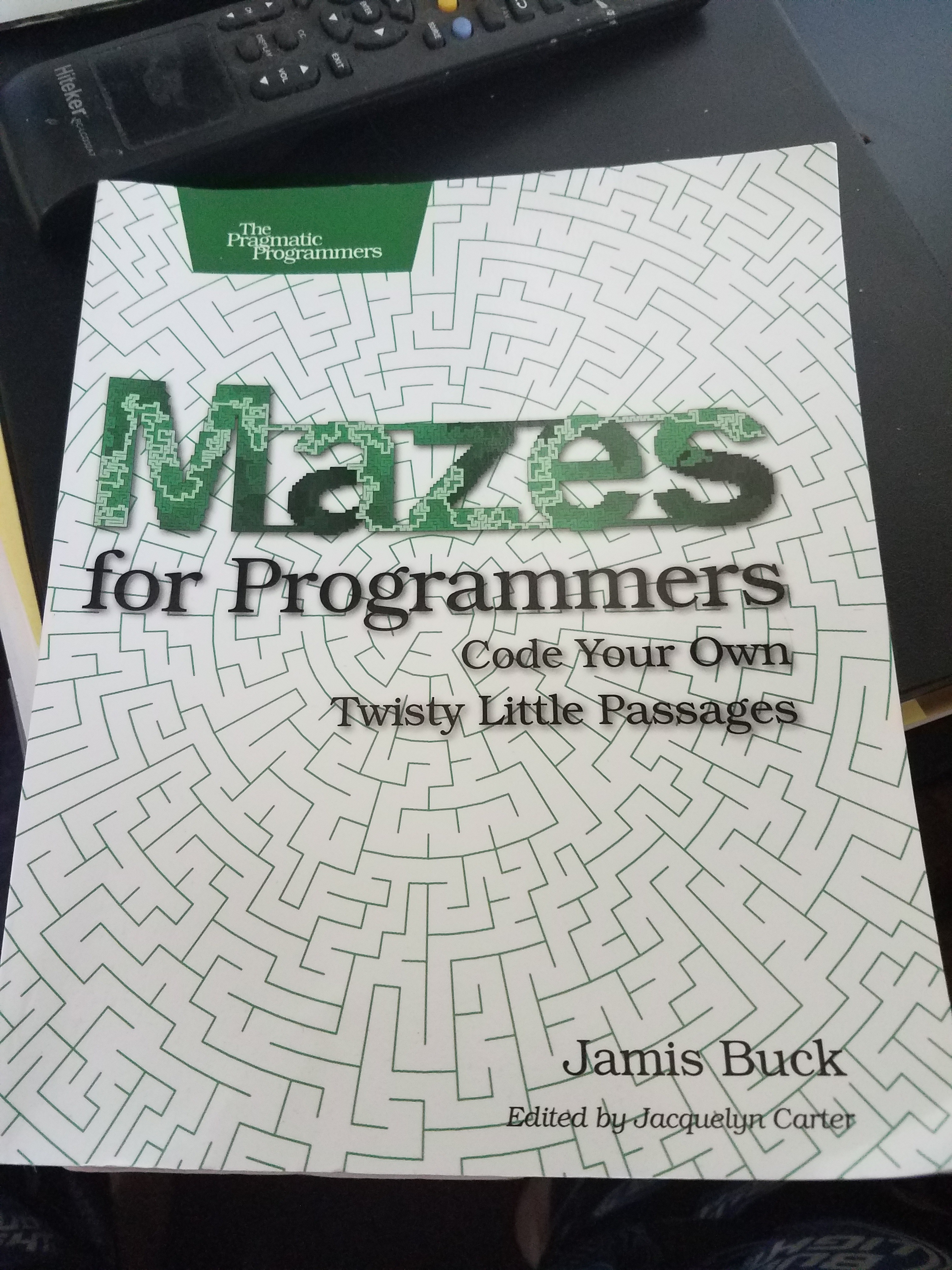 A few weeks back, I picked up a copy of James Buck's Mazes for Programmers: Code Your Own Twisty Little Passages. (The title is, of course, an homage to one of the original text adventure games, Colossal Cave Adventure, or Adventure for short, which featured a maze puzzle where every room was described as "You are in a maze of twisty little passages, all alike"). I read through most of it on my veranda in the mornings, looking out over Long Bay in Antigua while I was on vacation, wishing I had brought my laptop along with me (although my girlfriend is probably happy I did not...). Once I got back, I started diving into implementing some of the ideas from the book - it's been quite a joy, and a much needed break from debugging UCWA applications at the day job.

The code in the book is implemented in Ruby, however, I'm not a Rubyist, so I decided that I'd work through the examples in my language of choice, C#. The code is pretty simple, so porting it over has been pretty straight-forward. I also figured it would be an interesting exercise for trying out some of the newer features in the more recent versions of C# - I've been stuck using C# 5.0 due to some tooling that we haven't had a chance to upgrade yet at work. Today, I'm going to mostly cover the examples from Chapter 2, which lays out the general plumbing of the framework that the rest of the book builds on, and implements two simple maze-building algorithms, the Binary Tree and Sidewinder algorithms. For the full code, you can check out my GitHub repository; things there may change slightly from the version presented here as I work through more of the book, but the general structure should remain similar.

The easiest way to model a maze is as a 2D rectangular grid of cells. 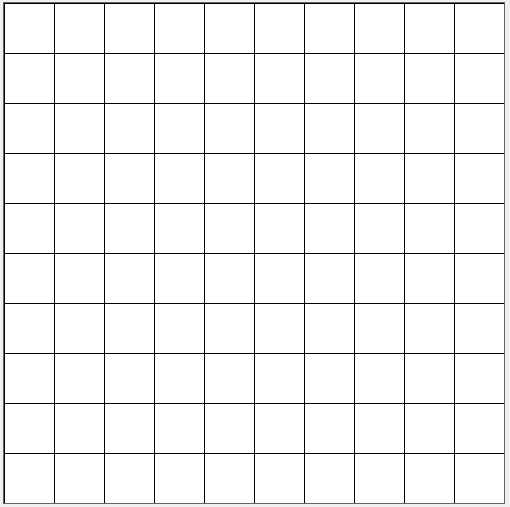 The first step is to define the structure that we will use to represent each cell in our maze grid. There are a few pieces of information that we need to keep track of:

You can ignore the [CanBeNull] annotations if you like - these are just some hints for the ReSharper static analyzer.

We'll also define some utility functions which will serve to link and unlink cells, and to test whether two cells are linked. Our linking functions will also handle making sure that links are bidirectional, although with the option of making one-way links. For now, we're not going to make much use of this, but one can imagine that if we extend our map to include one-way connections, like chutes between levels, that will come in handy.

With the Cell data structure taken care of, we can move onto our Grid class. This will consist of:

At this point, we can setup and represent a grid for a maze, but we really need a way to output this grid in a way that makes it easy to visualize. As a first step, we'll override the .NET ToString() method to render the grid in ASCII, which is helpful for outputting to the console with small mazes.

Here is what that looks like with our initialized grid, before we have started connecting any cells:

This is pretty basic - we could fancy things up by using some Unicode or extended ASCII block characters, but it's good enough for debugging purposes. What would be more interesting is rendering the maze as an image, which we will do next, using some simple WinForms graphics commands.

This is a little nicer: 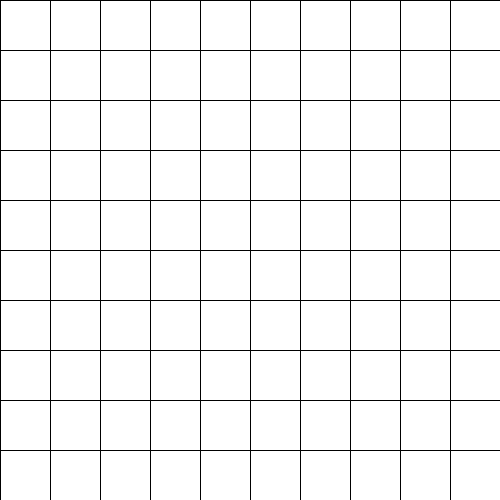 With those foundations out of the way, we can start implementing some algorithms to actually create mazes on our Grid. We're going to start with two very simple algorithms, the Binary Tree and Sidewinder algorithms. These algorithms are very fast and simple to implement, and require very minimal state - although they do have some disadvantages, as we will see.

NOTE: If you examine the code on GitHub, these algorithm classes are somewhat more complicated than shown here - they include some additional logic that makes it possible to run the algorithms one step at a time, which is handy for visualizing how the algorithms work.

The Binary Tree algorithm is very simple. For each cell in the grid:

Here you can see the Binary Tree algorithm proceeding step-by-step. There's a couple things to note about this algorithm.

All in all, these biases make the Binary Tree rather predictable, but it is fast and easy on memory.

The Sidewinder algorithm is very similar to Binary Tree, albeit with a few tweaks that reduce some of the biases evidenced by the Binary Tree algorithm. Instead of considering every cell independently, we will have to maintain a bit of state to keep track of the last run of cells in the row that we have processed. Starting with the western-most cell in each row:

This is easier to see than to describe in words, but roughly what we are doing is, instead of choosing to go north or east at every cell, we chose between going east, or going north from somewhere in a block of east-west connected cells.

To close, here are the results of the two maze generation algorithms, with Binary Tree on the left and Sidewinder on the right, for comparison's sake. Included in the project on GitHub is a small WinForms app that allows stepping through the algorithms step-by-step, changing the random seed, and saving the mazes out to an image - feel free to play around with it. 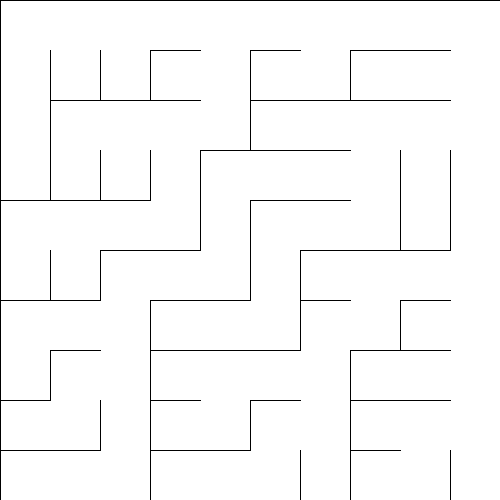 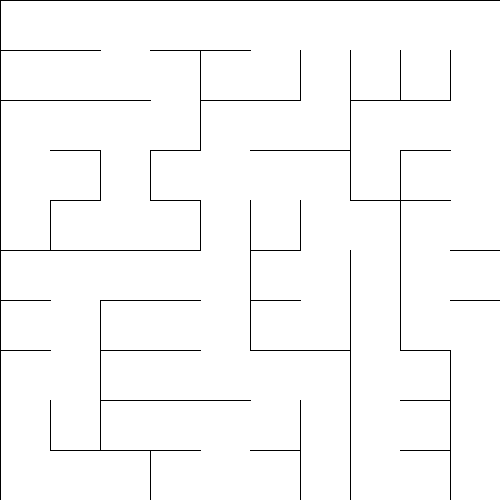 This has been fun; I'm hoping I'll have time this week to move a little further and write up another post on the next chapter or two and get into implementing Dijkstra's algorithm, as well as some of the more advanced maze generation algorithms.

P.S. I would recommend vacationing at Long Bay, Antigua. The Pineapple Beach Club was beautiful 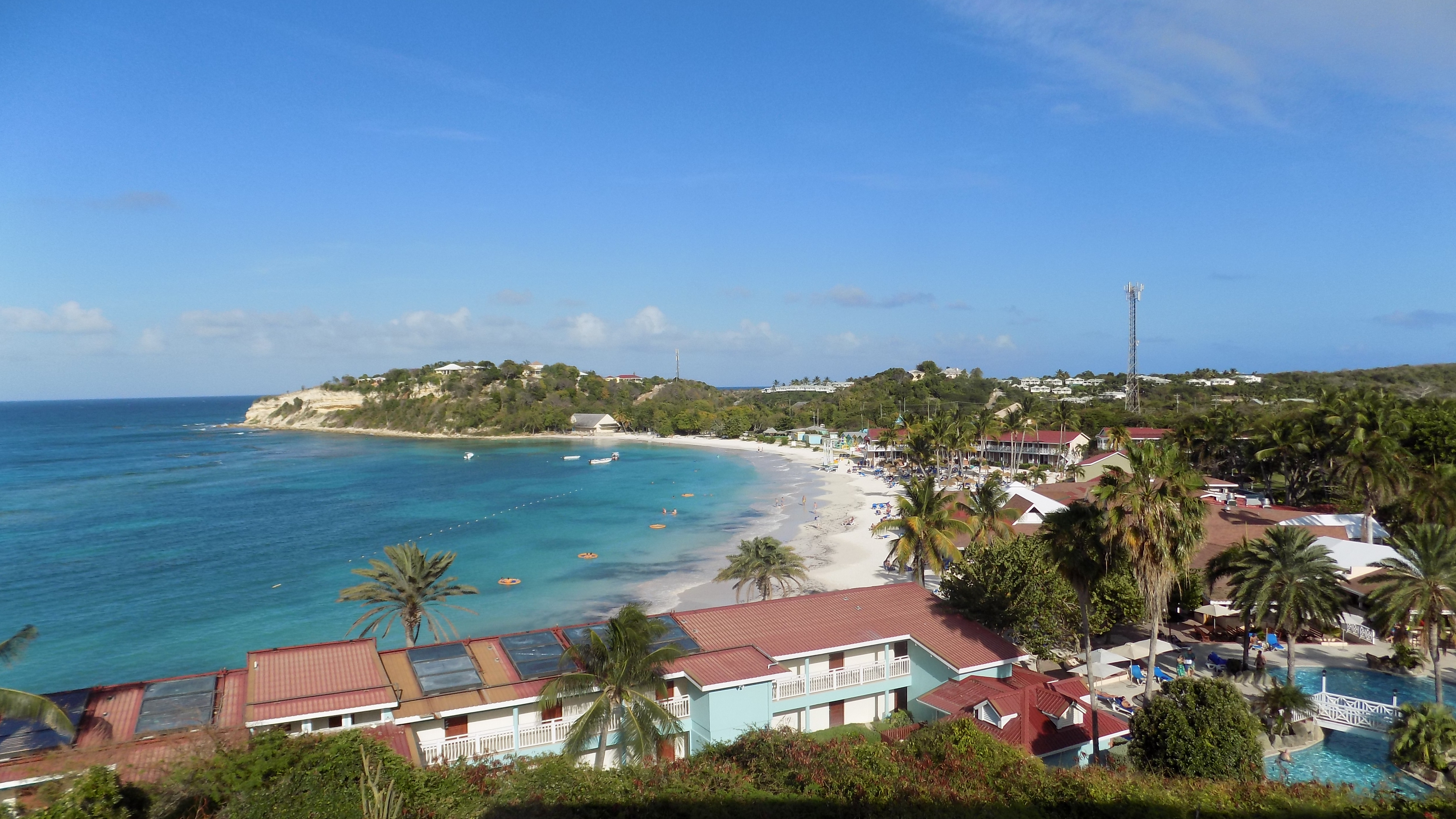