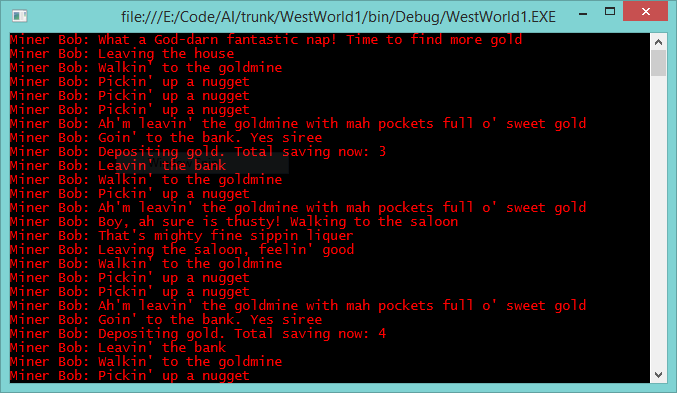 One of my favorite books on AI programming for games is Matt Buckland's Programming Game AI By Example. Many AI programming books lean more towards presenting topics and theories, leaving the dirty work of implementing the techniques and algorithms up to the reader. This book takes a very different tack, with each chapter featuring one or more fully implemented examples illustrating the techniques covered. Even better, it comes in a format similar to a trade-paperback, rather than a coffee table book-sized tome, so it's relatively handy to carry around and read a bit at a time, as programming books go. It is also decidedly focused on the kinds of real-world, relatively simple techniques that one would actually use in the majority of games. And, mixed in the right combinations, these simple techniques can be very powerful, as the second half of the book displays, building an increasingly sophisticated top-down, 2D shooter game.

What I particularly like about this book though, is that while it is presented as a book for programming game AI, it may be the best practical explanation of a number of fundamental AI techniques and patterns that I have seen. The lessons that I learned reading through this book have been just as applicable in my day-job as an enterprise developer as in my hobby work programming games, much more so than what I learned toiling through a semester-long AI course based on Artificial Intelligence: A Modern Approach...

The first real chapter of Mr. Buckland's book (leaving aside the obligatory math primer chapter), is devoted to finite state machines. Finite State Machines are one of the simpler ways of organizing decision making, and are probably one of the most intuitive. I'll let Mr. Buckland's definition stand by itself:

I've been working on porting the first example from Mr. Buckland's FSM chapter from C++ to C#, featuring a mildly alcoholic, spaghetti Western gold miner named Bob. I'm going to focus mostly on the FSM-specific code here, but you can get the full code from https://github.com/ericrrichards/ai/tree/master/trunk/WestWorld1.

The first thing we need to do is to define a base class to represent different entities in a game which can have an FSM applied to them. For the purposes of this simple example, all that the base entity class really requires is a unique identifier, Id, by which we can refer to the entity. For convenience, we are also going to add some additional properties and a message to reduce the amount of duplication when we are logging out the entity's actions to the output window: Name, the name of the entity, Color, the color that the text output by the entity should be, and LogAction(), which writes a message to the console for the entity.

For thread-safety, we're going to implement some locking around the incrementing of the unique identifier seed that the BaseGameEntity class uses. It is a bit of overkill for such a simple example, but it is good practice to think about thread-safety with any writable global variables.

Aside from the previously mentioned properties and methods, we will define an abstract Update() method, which will be called each frame in order to update the FSM machine for the entity.

The ConsoleUtilities class referenced by LogAction() is a simple utility class which provides a wrapper around actions which interact with the .NET System.Console class.

With the BaseGameEntity class defined, we can move on to define an interface to represent the different states which our entity may be in, in the finite-state machine. This interface consists of three methods:

To understand how this works, let us take for example a simple scenario where we have two states, A and B. We will start with our entity in state A. Let us assume that the Execute method of state A contains logic to transfer the entity into state B. In this case, the control flow for a frame would be:

With that groundwork out of the way, we can move on and define the protagonist of this little example, Miner Bob. Miner Bob is a pretty stereotypical old-timey Western prospector. He lives alone in his shack, and spends his time sleeping and mining for gold. When he's filled his pockets with gold dust, he tramps off to town to deposit it in the bank, and when he gets thirsty, he also heads into town to spend his hard-earned geld on rotgut whiskey. When he gets tired from all his mining, banking and drinking, he heads back to the shack and takes a nap. It's a simple life, but it works for Bob.

Let's get started defining a class to represent Miner Bob.

First off, we've got some constants that control Bob's behavior.

Next, we've got some member variables to track Bob's state.

Last, we've got some convenience functions to check the miner's state and perform some updates, respecting the various constraints that we have defined.

We still need to override the BaseGameEntity Update() method, as well as provide a mechanism for the miner to change between states. We'll do that next:

FInally, we'll provide a constructor to initialize the miner, place him in his initial state, and set him at home in his shack:

Now that we've defined our Miner entity, we need to define the various states that control his behavior. For this example, we'll define four, mutually-exclusive states:

You may notice that these states are implemented as singletons, following the pattern illustrated by Jon Skeet. This means that the states can only define behavior - any state that needs to be maintained needs to be contained by the entity, rather than within the state itself. This is fairly efficient, as we then only need to instantiate a single instance of the state object, but may not be ideal for all usages.

To wrap things up, the last step is to write a simple Main() function to create a Miner and run him through the simulation:

In the next installment, we'll look at refining the FSM developed here, in order to make it more reusable. We'll also look at adding a second entity to our simulation, and implement some simple messaging between entities.